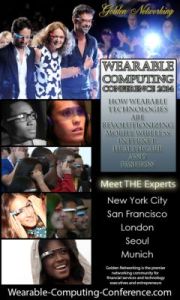 Ms. Eadicicco has been reporting on all things mobile for LaptopMag.com since early 2013. When she’s not reviewing smartwatches or playing with heads-up displays, she’s combing through the U.S. patent database for new developments in wearable tech.

Ms. Eadicicco’s work has appeared on outlets such as NBC News, Fox News and Mashable among other websites, and she has been featured in a technology segment on Fox 5’s evening news broadcast. Ms. Eadicicco holds a B.A. in Journalism from SUNY Purchase and has previously covered technology for The International Business Times and Digital Trends.

The future is here at Wearable Computing Conference 2014 with the production of a new generation of technologies such as Google Glass, Apple “iWatch” and Samsung Galaxy Gear, among others, that will allow users to interact with computing devices that are worn by the bearer under, with or on top of clothing. The introduction of smart watches and glasses bring upon economic, social and personal effects that will revolutionize the human experience.